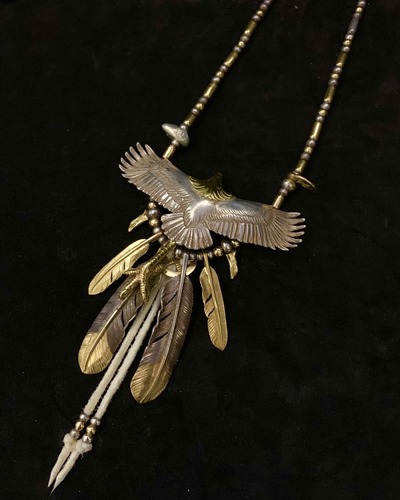 As you may already know, all the accessories and leather items from goro’s are inspired from the culture of the Native Americans.

goro’s have been inspiring people from across the world.

This phenomenon is led by the soul and spirits of Goro Takahashi.

Goro Takahashi was fascinated by leather carving and the Indian culture in the United States during his young age.

During his highschool year, he started learning the leather carving techniques from the American troops.

He was very intrigued and devoted his life to leather carving.

After a while, Goro decided to travel to the United States to meet the Lakota People from South Dakota.

This is the origin of his journey with goro’s.

During his stay at South Dakota, he learned carving techniques for silver from the tribes.

After meeting with the Lakota People from time to time, he eventually practiced the Sun Dance ceremony and built a strong relationship with the tribe.

It was definitely not an easy process. His passion, concentration and perseverance is what made him succeed.

After completing all the rituals, he was given the title “Yellow Eagle”.

He was the first Japanese ever to be inducted into the Lakota tribe.

In literal terms, we could say that he was recognized as American Indians.